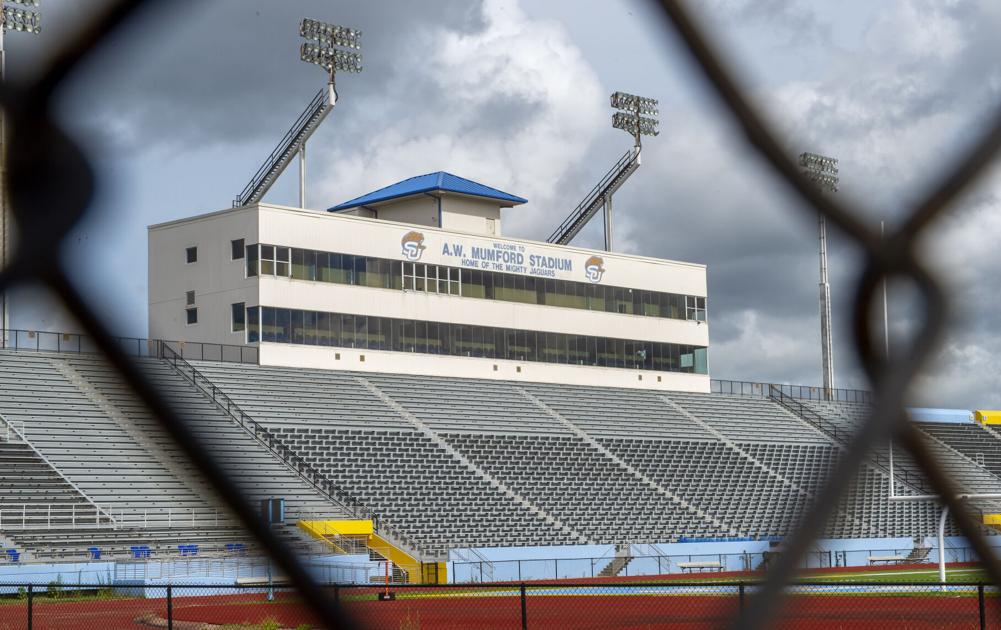 [Editor’s note: This story been updated to reflect an updated figure regarding LSU’s contracts]

He doesn’t need to lean on much of that experience to analyze the financial blow his athletic department’s budget might take if the Warhawks’ nonconference football games are canceled because of the coronavirus pandemic.

Moving to league-only football schedules has been the common move for big-time conferences looking to preserve their seasons as COVID-19 cases spike nationally. The Big Ten and Pac-12 cut their nonconference games two weeks ago, and a growing list of smaller leagues, including the Southwestern Athletic Conference, have chosen to outright postpone fall sports until the spring.

Both decisions eliminated scheduled nonconference games — many of which were so-called “guarantee games” that can make up a substantial portion of a smaller athletic program’s revenue. Perhaps you’re familiar with the arrangement: Team A pays Team B a sum of money to play a football game on a given date.

The Big Ten and Pac-12’s elimination of guarantee games appeared to wipe out more than $45 million, according to a report from USA Today, and if all nonconference games involving Football Bowl Subdivision teams were to be canceled, the total value would exceed $160 million.

An analysis of the nonconference contracts involving Louisiana’s 11 Division I football teams revealed that all of the state’s guarantee games combined have payments totaling more than $15.5 million.

Louisiana schools could lose a combined $7.25 million if their guarantee games are canceled.

ULM stands to lose the most, although Tulane declined to disclose its contracts with Northwestern, Baylor and Vanderbilt — which are all private institutions and are exempt from public requests of such information.

There are no plans to cancel Louisiana prep sports for fall, says letter from LHSAA director

The Warhawks are scheduled to receive a total of $3.15 million from its games against Southeastern Conference opponents Georgia and Arkansas — a considerable sum of money when compared to the school’s $15.6 million total revenue in 2018-19.

The SEC has yet to decide what it will do with its nonconference games, but cutting loose guarantee games can be devastating for smaller programs that are already adjusting budgets due to the cancellation of spring sports when COVID-19 first surged across the nation.

Losses in ticket sales, NCAA distribution and other key forms of income at ULM have already added up to about $1.3 million in lost revenue, McDonald said, and an additional loss in guarantees could be brutal.

“If I cut your income 20% in your household, would you have to make some decisions?” McDonald said. “Obviously, when you lose that big of a chunk of the budget, you have to start looking to how can we recover that.”

The FCS league committed to a spring football season Monday, releasing a plan that includes six conference games and the option for a nonconference game. Since none of the FBS leagues have moved to the spring, it is unlikely that SWAC teams will be able to replace the guarantee games they lost.

Grambling was scheduled to receive a combined $850,000 for its games against South Alabama and UT-San Antonio, and Southern would have been paid $405,000 just for playing in the Detroit Football Classic against Tennessee State on Sept. 5.

Now the schools are among the SWAC members that are leaning heavily on the remaining funds from institutional support, and athletic officials are counting on high attendance numbers in the spring to prevent further losses.

Southern athletic director Roman Banks said he estimates it will take about two years to financially recover from COVID-19. His staff is telling him the fallout will total almost a $3.5 million loss.

“I think we’re going to be climbing a mountain until we’re able to get ourselves caught back up,” Banks said.

Walker: Without SWAC football, and the pageantry that comes with it, fall Saturdays won’t be quite the same

Nicholls State, Louisiana Tech and Northwestern State were scheduled to pay their SWAC opponents a total of $462,500, but the league’s move to play football in the spring doesn’t necessarily mean that payments won’t be made.

Schools may still have to pay their guarantees, pay cancellation fees or negotiate settlements depending on the language of the contracts.

There are common clauses — often titled “force majeure” — that set terms for what happens if a game is canceled because of circumstances beyond either school’s control. The clauses are often phrased differently, which could produce various results in the coming months.

Missouri includes the word “epidemic” in its contract with UL. “There’s no doubt the pandemic is covered” within the phrasing, LSU law professor Olivier Moreteau said, which would likely exempt Missouri from paying UL $1.3 million if the game is canceled or the SEC moves to a league-only schedule.

There’s still a legal argument to be made given the game’s date: Nov. 21, which is smack in between Missouri’s conference games against Florida (Nov. 14) and Arkansas (Nov. 28).

If Missouri is playing SEC games the week before and the week after, is a game truly impossible to play because of an epidemic?

“Well, you may say then that the trigger is the decision of the SEC to cancel that game because of the pandemic,” said Moreteau, who specializes in contract law. “So it’s actually a sort of outside decision that is made by an authority, which is typically (listed) within the framework of that clause.”

Rabalais: Sad as its decision is, the SWAC chose the right time to punt on fall sports

Essentially, Missouri would be legally exempt because the involvement of a “public authority or prohibitory authority” made it impossible for them to play. In this hypothetical case, that authority would be the SEC’s decision to move to league-only play.

For similar reasons, UL may be relieved of its $150,000 payment to New Mexico State for their Oct. 24 game. New Mexico Gov. Michelle Lujan Grisham wrote a letter to the state’s universities Wednesday, asking them to consider suspending all fall sports because of the spread of COVID-19. It is uncertain whether the letter will lead to action.

LSU’s contracts with UTSA and Nicholls, totaling $2.4 million in payments, are more specific in authority exemptions, naming the NCAA and the SEC as authorities that can make it “impossible or impractical” to play the game.

The deals LSU made with Texas and Rice either include the phrases “natural disaster,” “national emergency,” “epidemics” or quarantine restrictions.

The programs could also reschedule to play in a future season.

An LSU athletic official declined to comment on the contractual possibilities.

SEC players opting to sit out amid coronavirus can keep their scholarships: ‘We support you’

The Advocate spoke with five athletic directors in Louisiana, and each one expects there will be similar legal debates over contract language if more guarantee games are canceled.

Some Louisiana schools may have the legal right to seek cancellation fees.

The contract for Nicholls State’s canceled Sept. 5 game against Mississippi Valley doesn’t include a force majeure clause, which could force Valley to pay Nicholls a $100,000 cancellation charge.

Louisiana Tech athletic director Tommy McClelland said his program intends to notify Prairie View to pay them the $500,000 cancellation charge for their Sept. 19 game in Ruston.

The deal, which had Louisiana Tech paying Prairie View $350,000, has a smaller force majeure clause, listing only “Acts of God and nature” and “Acts of Common Enemy.” Moreteau said the pandemic qualifies under the phrase “nature.”

“In our opinion,” McClelland said, “we’re having to reschedule the game due to their cancellation.”

Prairie View’s clause in its home-and-home contract with Northwestern State is similarly short, including only “weather, fire, flood, earthquake, war or other acts of God and nature or acts of common enemy.”

The cancellation fee for Northwestern State’s Oct. 3 game at Prairie View is $100,000, but athletic director Greg Burke said his department will instead “make every effort possible to reschedule that game.”

Meanwhile, the rest of the state’s universities wait for direction from their leagues. Southland Conference commissioner Tom Burnett said Wednesday that the league is committed to playing football as scheduled. The Sun Belt announced Thursday that it is delaying fall sports until Sept. 3, a move that is similar to the SEC’s decision to postpone fall competition through August.

SEC commissioner Greg Sankey said the league is expected to make a decision on its football season based on public health trends next week, and UL athletic director Bryan Maggard said the decision may influence the direction of conferences like the Sun Belt.

“I don’t know if the status of our nation is going to be any different than it is today,” Maggard said. “But we all definitely want to play 12 games and start on time. That’s the ultimate desire for everybody.”

News You may have missed

Damone Clark and Chris Curry will wear No. 18 for LSU, but who wore it before them?